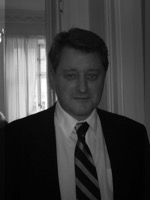 Robert Virding is one of the co-inventors of Erlang and was an early member of the Ericsson Computer Science Lab. He took part in the original system design and contributed much of the original libraries, as well as to the current compiler.

He has always been interested in language design and implementation and at the lab he did a lot of work on the implementation of functional and logic languages. More recently he has done a number of implementations of different languages in Erlang, and on the Erlang system, which have been spread and used externally.

He is now Principal Language Expert at Erlang Solutions Ltd. and is regularly invited to teach and present throughout the world.